Back to the Unique Home Page
The Blog Index

Not the usual entry for the Unique Property blog, but I do do other things beside dabble in real estate.
Back in the eighties I fronted a band called The Mockers. Here's a pic of us on tv. 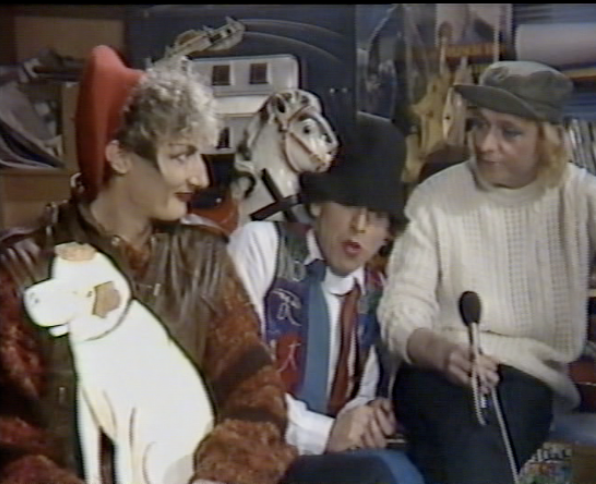 We even made quite a splash when we inaugurated The Mocker Olympics, and some clips from that auspicious ocasion managed to almost drown out everything else on a program called Sixty Minutes.
Being Mockers we did everything awkwardly. We did a backwards running race, swimming on ground, catching the discuss, the low jump... You get the picture. I'll have to dig out some shots from that tv program.
Unfortunately we never made it to Number One, but then we weren't the only band to get screwed. I must issue my autobiographical volume on the music business back then, which includes working with Mike Leander, The Hollies, a crazy birthday party with Phil Lynott of Thin Lizzy, and working with a bunch of lunatics called Cuddly Toys, and also working with the gorgeous Sue Wilkinson, former Miss England. It's sad how few of those people are still with us.
I decided it was time to produce a new Christmas song, and took as my inspiratoion The King's Breakfast, that fun poem by A A Milne, which I used to read to my kids, and indeed to kids on the bus coming back from school. That caused a spot of bother because the other kids wouldn't get off the bus till I'd finished reading the poem.
There was a similar situation when my son went into hospital to have his adenoids out. I turned up to visit, and brought the poem, and started reading it. I could see all the kids in the other beds straining to hear what I was reading so I invited them over and they sat on the bed, and on the floor around me. A few moments later a whole string of parents arrived, and the kids just ignored them. They wanted to hear the story. Parents paced up and down for about five miniutes getting more and more frustrated until they went home after getting no response to their repeated goodbyes.
Here's a preview of The King's Breakfast.

Please leave a comment if you like the song (see at the bottom of this page). That would be much appreciated.
I am currently putting the finishing touches to a couple of E.P.s that I will be issuing, hopefully next week. I will put links to them, but will post them on my Youtube channel. There are christmas songs, with lyrics appropriate to the current situation, and there are songs about the world we are currently having to put up with. I hope you like them, or at least find them interesting.

[an error occurred while processing this directive]